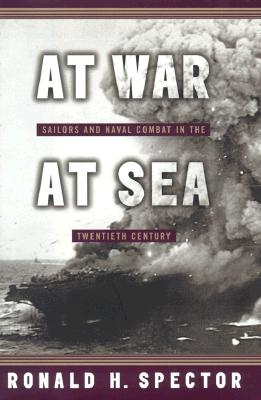 AT WAR AT SEA :Sailors and Naval Combat in the Twentieth Century

At War at Sea is a fascinating account of the most important naval conflicts of the twentieth century. The book begins with a gripping account of one of the most decisive battles in history, the 1905 Battle of Tsushima, between the Japanese and the Russians, and ends with the sophisticated missile engagements off the Falklands and the Persian Gulf. Ronald H. Spector, former director of naval history for the U.S. Navy, chronicles not only the mechanics of battle and the changing technology of war, but also presents these extraordinary stories from the point of view of the participants. How did it feel to be the target of a 15-inch shell at the Battle of Jutland or to experience a depth charge attack in a submarine in the Battle of the Atlantic? What was it like to be under attack by Stuka dive bombers off Crete or kamikazes off Okinawa during World War II? Using more than a hundred diaries, memoirs, letters, and interviews as well as official records, Spector takes an in-depth look at fighting sailors-in peacetime and in time of war-that is unparalleled both in scope and emotional intensity.

Title: AT WAR AT SEA :Sailors and Naval Combat in the Twentieth Century

AT WAR AT SEA :Sailors and Naval Combat in the Twentieth Century