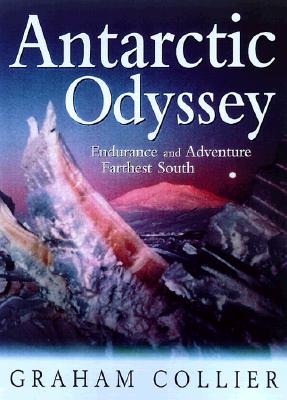 ANTARCTIC ODYSSEY : In the Footsteps of the South Polar Explorers

By: Collier, Graham And Patricia

It is the most remote and inhospitable, the coldest and driest of the earth's continents. Its bleakly stunning landscapes have attracted the boldest of the heroic age of exploration. Graham Collier tells its story in gorgeous photographs and vivid prose -- and how, like Scott, Amundsen, Shackleton, and others before him, he fell under the spell of Antarctica.

Very few people, scientists or explorers, have seen Antarctica as has Graham Collier. He has visited the camps of Scott and Shackleton, reached the slopes of the 13,000-foot volcanic Mount Erebus, and traveled to the unimaginably remote Peter I Island and Elephant Island, where the crew of the Endurance was marooned for four months. He has walked among basking seals, called on penguin rookeries, been dive-bombed by skua-gulls, and admired albatrosses like those in "The Rime of the Ancient Mariner". Following in the footsteps of the great explorers from Captain Cook and James Clark Ross to Shackleton and Douglas Mawson, he recreates the experience of encountering the "last continent" in all its icy splendor.

In this exquisite book, Collier attempts to answer polar explorer Jean-Baptiste Charcot's question, "Where does the strange attraction of the polar regions lie, so powerful, so gripping that on one's return from them one forgets all weariness of body and soul and dreams only of going back?"

Title: ANTARCTIC ODYSSEY : In the Footsteps of the South Polar Explorers

ANTARCTIC ODYSSEY : In the Footsteps of the South Polar Explorers