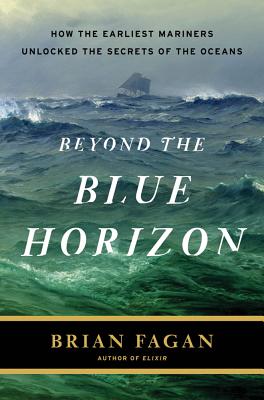 Beyond the Blue Horizon : How the Earliest Mariners Unlocked the Secrets of the Oceans

In "Beyond the Blue Horizon," archaeologist and historian Brian Fagan tackles his richest topic yet: the enduring quest to master the oceans, the planet's most mysterious terrain. We know the tales of Columbus and Captain Cook, yet much earlier mariners made equally bold and world-changing voyages. From the moment when ancient Polynesians first dared to sail beyond the horizon, Fagan vividly explains how our mastery of the oceans changed the course of human history.
What drove humans to risk their lives on open water? How did early sailors unlock the secrets of winds, tides, and the stars they steered by? What were the earliest ocean crossings like? With compelling detail, Fagan reveals how seafaring evolved so that the forbidding realms of the sea gods were transformed from barriers into a nexus of commerce and cultural exchange. From bamboo rafts in the Java Sea to triremes in the Aegean, from Norse longboats to sealskin kayaks in Alaska, Fagan crafts a captivating narrative of humanity's urge to challenge the unknown and seek out distant shores. "Beyond the Blue Horizon "will enthrall readers who enjoyed Dava Sobel's "Longitude," Simon Winchester's "Atlantic," and Jared Diamond's "Guns, Germs, and Steel."

Title: Beyond the Blue Horizon : How the Earliest Mariners Unlocked the Secrets of the Oceans

Beyond the Blue Horizon : How the Earliest Mariners Unlocked the Secrets of the Oceans