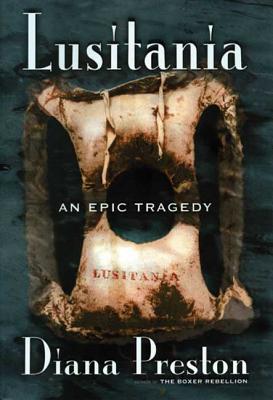 On May 7, 1915, toward the end of her 101st eastbound crossing, from New York to Liverpool, England, R.M.S. "Lusitania"-- pride of the Cunard Line and one of the greatest ocean liners afloat-- became the target of a terrifying new weapon and a casualty of a terrible new kind of war. Sunk off the southern coast of Ireland by a torpedo fired from the German submarine "U-20," she exploded and sank in eighteen minutes, taking with her some twelve hundred people, more than half of the passengers and crew. Cold-blooded, deliberate, and unprecedented in the annals of war, the sinking of the "Lusitania" shocked the world. It also jolted the United States out of its neutrality-- 128 Americans were among the dead-- and hastened the nation's entry into World War I.
In her riveting account of this enormous and controversial tragedy, Diana Preston recalls both a pivotal moment in history and a remarkable human drama. The story of the "Lusitania" is a window on the maritime world of the early twentieth century: the heyday of the luxury liner, the first days of the modern submarine, and the climax of the decades-long German-British rivalry for supremacy of the Atlantic. It is a critical chapter in the progress of World War I and in the political biographies of Woodrow Wilson, William Jennings Bryan, Kaiser Wilhelm II, and First Lord of the Admiralty Winston Churchill. Above all, it is the story of the passengers and crew on that fateful voyage-- a story of terror and cowardice, of self-sacrifice and heroism, of death and miraculous survival.
With a historian's insight and a novelist's gift for characterization and detail, Preston re-creates the events surrounding the "Lusitania"'s last voyage, from the behind-the-scenes politics in each country and the German spy ring in New York, to the extraordinary scene as the ship sank and the survivors awaited rescue, to the controversial inquests in Britain and the United States into how the ship came to be hit and why she sank so quickly. Captain William Turner, steadfast and trustworthy but overconfident, believed that "a torpedo can't get the "Lusitania"-- she runs too fast."
The passenger list included the rich and powerful (American millionaire Alfred Vanderbilt, theater producer Charles Frohman, Boston bookseller Charles Lauriat) as well as newlyweds and nursemaids, galley cooks and stokers, Quakers and cardsharps, ship's detectives and German stowaways. Preston weaves their voices throughout her compelling narrative, giving it a powerful immediacy.
Drawing on a vast array of sources-- including interviews with survivors, letters and memoirs, recently released American and Admiralty archives, and previously untranslated German documents-- Diana Preston has resolved the controversies surrounding the "Lusitania" and written the definitive account of this pivotal event in western history.

Description: Blindsealed, else as new